Where Does Delta-8 THC Come From? Hemp Legalization and the 2018 Farm Bill Hemp and marijuana both come from the plant species, Cannabis sativa. The primary difference between the two is that marijuana is cultivated to have high levels of Delta-9 THC. Delta-9 THC is the most common cannabinoid (compounds found in cannabis) typically associated with making users feel “high.” Hemp, on the other hand, is characterized as having very low levels of Delta-9 THC. Industrial hemp in particular is defined in the 2018 Farm Bill as any Cannabis sativa plant that contains less than 0.3% Delta-9 THC by dry weight. Because of this bill and definition, it is federally legal to grow, sell, purchase, and ship industrial hemp within the U.S. This has created a legal distinction between industrial hemp and marijuana-cannabis. Federally, marijuana remains illegal, though many states have legalized marijuana use for medical and even recreational use.

Common Hemp Byproducts and How CBD is Extracted Hemp has a plethora of everyday uses in its raw and derivative forms. Basically anything you can think of can be made from hemp, ranging from soaps, to clothing, dog treats, and even concrete! CBD (cannabidiol), one of the most common cannabinoids found in cannabis (both industrial hemp and marijuana), can be isolated and extracted from the cannabis plant. Two of the most common ways to isolate and extract cannabinoids like CBD involve using chemical compounds like carbon dioxide and a solvent such as ethanol.

Carbon dioxide (CO2) extraction involves using supercritical CO2, or carbon dioxide which is in between a liquid and gas state, to separate CBD from plant material. CO2 is exposed to low temperatures and high pressures using pressurized chambers that contain hemp biomass. The hemp plant is therefore exposed to the supercritical CO2 which proceeds to act like a solvent and causes the plant material to separate from an oil form, which extracts all the essential compounds, like CBD.. The oil and CO2, now separated from the hemp plant, are then pumped into a third chamber, where the CO2 is separated from the organic compounds and the manufacture is left with just CBD oil. This oil can be refined further, but is generally, now ready to be manufactured into basically any product you can think of.

The other common way to extract CBD is to use a pure solvent, or something which dissolves other substances. Some common solvents include butane or ethanol. To extract the CBD, in very simple terms, the hemp plant is soaked in one of these solvents, which strips it of its cannabinoids. The solvent then evaporates and leaves behind an oil form of cannabinoids.

What Is Delta-8 THC?

How Delta-8 THC is Derived?

Delta-8 THC is usually derived from Delta-9 THC or CBD. The extraction process involves combining CBD or Delta-9 THC with a solvent. This mixture is then heated and stirred, and after about an hour, will become an amber color with a thick consistency. After the solution cools, it’s then poured into a funnel with a washing solution, where it is washed with water, neutralizer, and salt solution. The oil of the solution is then separated from the solvent through boiling. This oil is Delta-8 THC! CBD and Delta-8 THC both generally come from the hemp plant, an extremely versatile plant which can create a huge variety of products. Since it is so low in THC, hemp has been federally legalized through the passing of the 2018 Farm Bill. While CBD is extracted from the hemp plant itself, Delta-8 THC is usually extracted from CBD. The processes for extraction are both fascinating and complicated, but hopefully by reading this article you now have a better idea of where CBD and Delta-8 THC come from. It’s important to note is that while the processes can be complicated, it’s all just science! You can be sure that your products are safe by confirming the products you’re consuming were appropriately tested at an reputable lab. 3 Ways to Incorporate CBD into Your Daily Routine

Have you thought about trying to incorporate CBD into your daily routine but are unsure how to do it? Below, we will discuss three easy 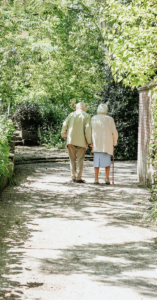 With cannabis products becoming more popular, people of all ages are looking to try them out. Older adults in particular may be interested because of What to Expect When Trying CBD

You may have heard of CBD, but you’re not quite sure what it is, what it does, or what the difference is between CBD and 5 Tips for Traveling with CBD and Delta-8 Three reasons CBD is not working for you